While CADs can sometimes coast through the warmer months of the year.  The cooler and colder months can often plummet hemoglobin levels.  Sometimes a slow slide.  But often a CAD will get a wake up.  A slap in the face.  Resulting in a rapid Hgb decline type of episode.  Sicknesses, or Cold Temperature exposures can often trigger such an episode.  Sometimes it is difficult to differentiate what might be the trigger?

While preventive pharmaceuticals may be beneficial to some.  They aren’t effective for others.

Preventative precautions may often times be just as effective.  Or even better at keeping you healthy.

Preventative precautions are best practiced ALL the time, and year round.  Keeping your body as healthy as possible at all times.  Waiting until you are in crisis, to then start paying attention, is not a healthy approach.

Blood tests would indicate the drop in hemoglobin levels.  But by the time that might be arranged, a CAD could be well into a full blown crisis.  Its good to have routine CBC/RBC tests scheduled in advance by your doctor.  At a much closer interval during cool and cold months.

The point of all of this is this.  Many CADs need to take a preventive approach to avoid lowering their Hemoglobin counts/levels.

Avoid cool temperatures, getting chilled, or cold.  Practice this 100% of the time.  Keep your environment warm at all times.  CADs often have to stay in 75-80°F temps to avoid triggering Hgb lowering hemolysis.

If you must venture outside make sure you are bundled up.  Be sure normally exposed skin surfaces are covered.  For some, even inhaling cold air is a problem.  Cold drinks and foods become more of a hazard to some, and even more so in the colder months of the year. 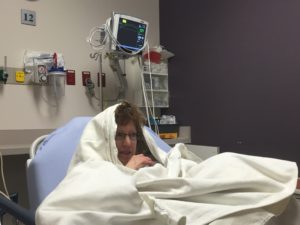 Sleeping and exposing parts of your body to cooler room temperatures for 8 hours can be a real problem too.  Up the room temperature.  Wear a stocking cap, long arm sleeves, long leg coverings, and socks.  Even gloves if need be.  Exposing an uncovered arm or leg, or even your head for any length of time can often accelerate a CADs hemolysis.  Once your body starts destroying red blood cells faster than your body can create new replacements (Retic).  You start sliding down that slope to becoming anemic, or more anemic.

But as with any statement about CAD.  All of this can all vary from individual to individual CAD.